When horses feel pride or joy, it’s very obvious to us, and we laugh or smile in response to them expressing just who they are.

When do horses behave “out of character?”

They may behave contrary to themselves in that they take on what they think people want, but then they are acting from a learned response. 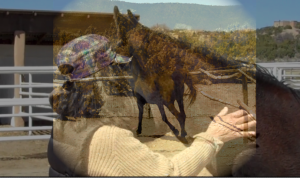 There is always that component of people to horses, because we have duplicitousness in our nature. Plus sometimes we are frantic to get something done with the horse that needs to be done, and don’t know how else to do it. All this is outside the horse’s nature and also outside his time frame of how long things take.

Recently there was a therapeutic riding horse at a clinic who was not exhibiting her true nature; she showed what she thought people wanted to see. I wanted to see her true self-image and her true nature. She was also very bonded to the horse she had trailered with, so we worked with them together and apart, getting to know who both of them were.

On the second day, the mare exhibited some true sweetness. She apparently ignored a lot of people who handled her at her facility, because, like in many therapeutic situations, there are many handlers who do not know enough about horses. Horses know they can ignore them or blow through them as though they aren’t there. Even the nicest horse will take advantage. 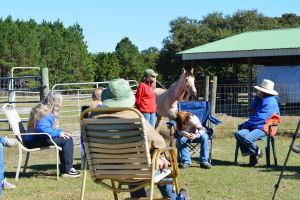 I have long thought that therapeutic riding horses have one of the hardest jobs, because they are being asked to subsume their self-image to be what people need. People who otherwise probably would never be on a horse work in that capacity. To reveal herself fully to those types of people would not be wise for this mare so she is smart holding back a part of herself.

A rescued horse very often they has some of the same characteristics as the therapeutic horse, but this isn’t who they truly are. They may not want to reveal their true nature because they are afraid of being hurt and their self-image may be damaged from abuse. They have carried a heavy burden and come out into a place that isn’t hostile, yet they will retain the behavior of the oppressed.

The same can be true of a horse that is living with a great deal of physical pain and imbalance. They will not be able to show you their true self-image. This is less of a learned response than the first two examples; it is a response born of a true inability to move comfortably. In this case bodywork, specific dental or hoof care, could be a place to start in finding a solution.

My two older horses have distinct self-images. They have remained the same from the day I brought them home, although their physical abilities have changed over the years. The playfulness my gelding Khami exhibited when I got him (this was definitely a horse who didn’t fear any reprisals for his antics) are still there, playing with the gates, goofing around with Patches and whatever else he can get himself into. He is also very loyal and still a lead horse and knows clearly what his role is in the herd. If he gets caught in a fence, he will wait for a human to get him unstuck. My mare Zuzka is still very business-like as she was at six, an upholder of justice, and has always been rooted to the ground, with her big feet and stocky body. She makes sure if she must move another horse, someone is not in the way. It’s almost like she has charted the other horse’s course if she moves him, to make sure he won’t knock someone over.

I can look to their natures to know what is amiss with them, when they begin to have a problem. If something doesn’t fit with their self-image, then what is going on? Imagine how unsettling it is for us, for example, when we have a health problem that may prevent us from running five miles a day when we’ve done this for 20 years! The horse also continues to do what he always has, but does not understand why he is slower, or can’t quite go down hills as easily, or stumbles when he has rarely stumbled before. He is still the same horse in the same body, yet the body has changed and doesn’t support his drive. And even, soon, his drive diminishes, changes, becomes softer as his body slows down, has a glow around the edges, as though backlit by the sun.

The horse with strong opinions still has them but they morph and some of the same things don’t matter to him anymore as he ages. I don’t worry about this horse because he knows who he is and he will go out as he came in.

It’s important to find a way for the horse to reveal his self-image and true brilliance. The horse needs ways to express himself through true liberty – not trained liberty or trained anything else. There are other techniques other than the Liberty Foundations, that are probably effective, but I don’t know those, and I know that this one works. The additional training we put on a horse like riding or a specific discipline – are ideally built on these powerful foundations. This way the horse has an excellent start and can embrace new learning within the scope of his self-image.

With these tools, we can help him become whatever he is meant to become, and to show us what we can learn – which will bring out the best in both of us.

Keep an eye on the calendar as more events will be added as they are planned.

I’m now putting together the 2015 Clinic Calendar. Let me know if you want to do a clinic in your area. Prices will vary according to location.

April 10-12 – Spring Liberty Weekend in Oklahoma — Susan Smith and Ruella Yates, co-instructors. Contact either of us: susansmith@orthohorse.info or ruella@libertyfoundations for further details.

Who will benefit from this work?

All horses and humans, but specifically:

Susan is a member of the Independent Liberty Trainers Network. libertytrainersnetwork.com/

The Rhythm of Grazing